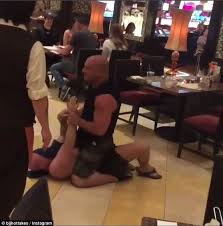 On the night of his UFC Hall of Fame induction, Matt “The Terror” Serra was recorded “handling” a drunk man.

How do you spend the night before your @ufc HOF induction?!? You subdue some asshole drunk that was threatening waiters then tries to swing on you. #jiujitsu

The incident occurred at the Red Rock in Station Casinos in Las Vegas. From a previous video posted on Matt Serra’s Instagram, it seems the man probably took exception to being recorded with passed out female he was with.

The Video shows Matt Serra in full-mount seemingly having a great time with the man. Security later appears and the two are separated.