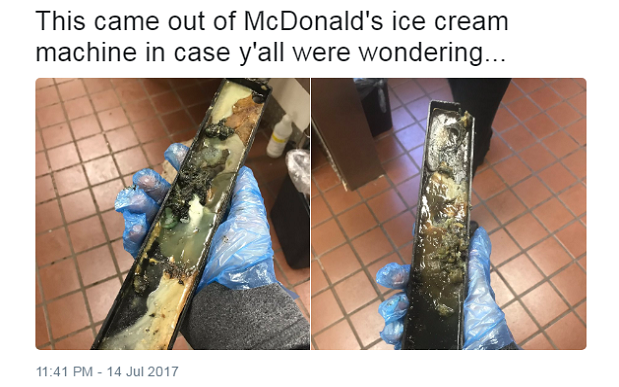 A former McDonald’s worker has went viral after sharing ‘disgusting’ photos from inside a moldy ice cream maker.

The teenager named “Nick”, shared the photos on Twitter, claiming: “This came out of McDonald’s ice cream machine in case y’all were wondering…”

This came out of McDonald's ice cream machine in case y'all were wondering… pic.twitter.com/DTXXpzE7Ce

Nick says McDonald’s fired him shortly after posting the photos.

The 18-year-old says he worked at a McDonald’s outlet in Louisiana for (5) months. Nick also told BuzzFeed he posted the photos to let people know “how disgusting the conditions are”.

This is the grease trap for all the people that think I'm lying… pic.twitter.com/fKQjxvKzM5

This is the side of the ice cream machine! It's not from a grease trap pic.twitter.com/nMpnFxAvZ4

McDonald’s said in a statement the equipment seen in the photos does not come into contact with any food.

“We are committed to running great restaurants that provide our customers with high quality food, service and a clean environment,” a spokesperson said.

“This is a part of our soft serve equipment that does not come into contact with any food and is required to undergo regular and timely cleaning.”

The dumb hick who live streamed on Facebook shopping at Walmart after saying he tested positive with coronavirus has been arrested. Justin M. Rhodes is a 31-year-old turd who thought it would be funny to [Read more…]

Watch this woman “Dollar Tree Debbie”, smile as she loads multiple boxes of toilet paper and paper towels after buying out the entire local ‘Dollar Tree’ store so that no one else can buy any.