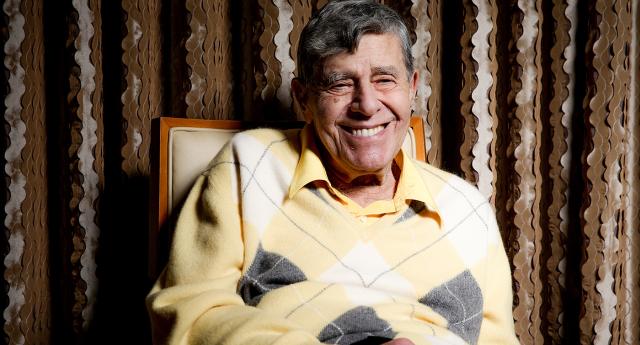 Born Joseph Levitch (or, per biographer Shawn Levy, Jerome Levitch) was born into a show-business family on March 16, 1926, in Newark, N.J. Lewis’s father was a Catskills entertainer; his mother, a pianist.

The Hollywood icon, Jerry Lewis starred in more than 50 movies. From the Martin-and-Lewis fare of Artists and Models to Martin Scorsese’s The King of Comedy as well as starred in, wrote, and directed the original Nutty Professor. Lewis also served as longtime host of the MDA telethon.

In a 2005 Los Angeles Times piece that stumped for an Academy tribute for Lewis, writer David Weddle suggested that Lewis’s reputation as a “tantrum-throwing egomaniac” might have hurt his stock with the Hollywood community.

Lewis was the center of controversy for his history of comments against women who work in comedy (“I don’t like any female comedians”), women who work in any professional field (“I think of [a woman] as a producing machine that brings babies in the world.”), and the very people his telethon was designed to help (“You don’t want to be pitied because you’re a cripple in a wheelchair? Stay in your house.”).

How did my life get good enough that Jerry Lewis would smile at me? And how sad to lose him. pic.twitter.com/taPhl1utzO

Jerry Lewis just died. When I met him, I feel apart, just sobbed. I guess it's time for that again.

Jerry Lewis has passed on. I sincerely hope his afterlife is a warm, peaceful…

The French were right about him all along. RIP Jerry Lewis pic.twitter.com/jNLRPQeS4G

Oh NOOOOO!!! Jerry Lewis just died! Another comic legend has left us. Martin&Lewis were the Beatles of comedy! Nobody was EVER bigger!

As a kid, I'm pretty sure I was the biggest Jerry Lewis fan in the world. Truly. R.I.P. Jerry Lewis.

One of the greatest of all time. A legend. A showman. A comedic icon. A movie star. An activist. A one of a kind. RIP #jerrylewis pic.twitter.com/h3ODZgZjAa

even tho u said women arent funny rest in peeeeeeeaaacccccceeeeee https://t.co/f4K8lav7zG

Condolences to the family of Jerry Lewis. The world is a lot less funnier today. ☹️

We have lost a great comedian and even greater heart. Thank you for the laughs and the feels, Jerry Lewis. https://t.co/vdYCfd7atJ

In recent years, Lewis battled a variety of health problems. His battle with pulmonary fibrosis pushed him to contemplate suicide, he eventually revealed. Earlier this year, Lewis required hospitalization and rehab for a urinary-tract infection.

“No comedian since Charles Chaplin has been so loved and so reviled,” David Weddle wrote in his defense of Lewis.